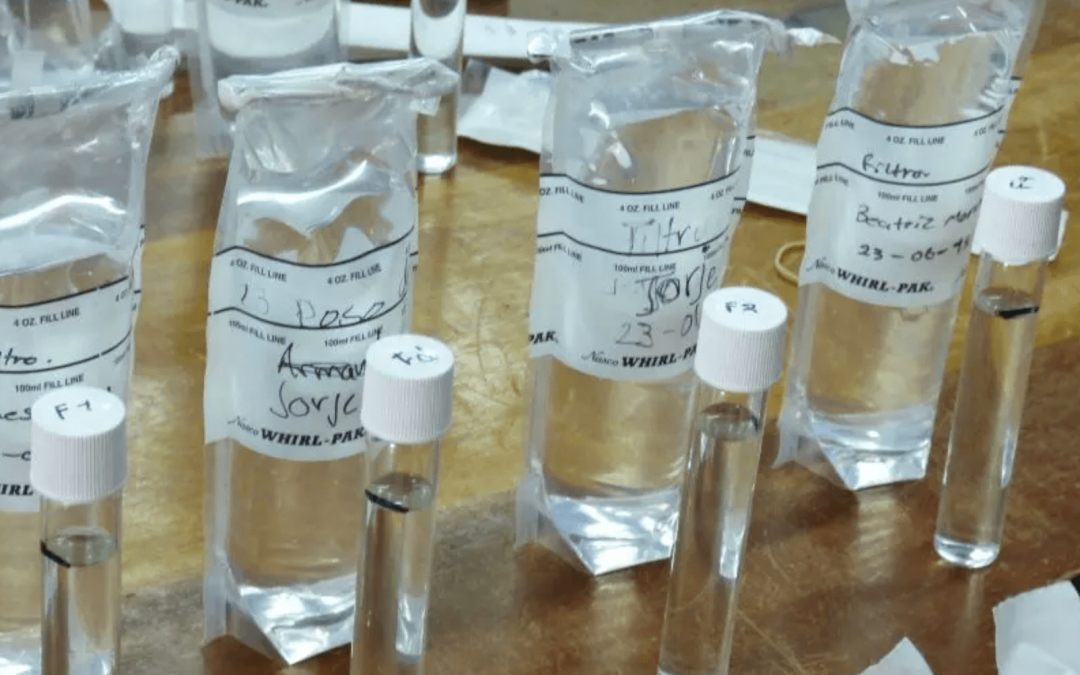 Water quality monitoring is often a missing factor in programs to improve access to safe drinking water in developing countries, despite its importance from a public health standpoint. This is because standard tests using multiple tube fermentation or membrane filtration require specialized equipment and training, and are not easily adapted to field testing. In addition, the linkage between water quality and disease is commonly not appreciated at the community and household level.

The history of water testing began shortly after 1876, when Robert Koch developed the methods and procedures that led to the isolation of bacteria and demonstrated that a specific bacterium was the cause of a specific human disease. Use of Koch’s methods in the 1880s demonstrated that the waterborne diseases of cholera, typhoid fever, and bacterial dysentery (Shigella sp.) were caused by specific bacteria. The big challenge was how to do the microbiology testing for fecal contamination. It was recognized that testing for all known disease causing bacteria was impractical. Because the major source of these disease microbes was fecal pollution, scientists searched for a universal microbial indicator of fecal contamination.

The bacterium Escherichia coli was found to be the best indicator of fecal pollution. The reasons for selecting E. coli are: 1) E. coli is always present in the feces of humans and other mammals in large numbers, whether one is healthy or sick (approximately one hundred million to one billion E. coli cells per gram of human feces ); 2) it doesn’t multiply when it laves the body and enters water, 3) it slowly dies when shed in feces, but it survives in water at least as long as the bacteria that cause typhoid fever, cholera, and dysentery; and 4) it is relatively easy to detect.

The presence of E. coli in drinking water, therefore, indicates recent fecal contamination, and the possibility that disease-causing microbes may also be in the water. The World Health Organization (WHO ) correlated levels of E. coli in drinking water with the risk of disease and the priority for action, and Medecins Sans Frontieres (MSF) correlated these levels for action in emergencies (Table 1 ).

Because there was no specific test for E. coli a century ago, substitute tests were adopted; these tests were first for total coliform bacteria, Gram negative rods that produced gas from lactose at 35°C and then, for thermotolerant (fecal) coliform bacteria, a subset of the coliform group that produced gas from lactose at 44.0-44.5°C, +/- 0.2. The thermotolerant coliform test was an attempt to be more specific in separating E. coli from environmental coliform bacteria that grow on plants and in soil, belonging to the genera Klebsiella, Enterobacter, and Citrobacter that are not associated with fecal contamination. Some environmental coliform bacteria, particularly in the genus Klebsiella, are able to produce gas from lactose at 44.0-44.5°C, and thus give a false positive test for E. coli (Elmund et al. 1999). Thus, the thermotolerant coliform test was not an adequate substitute test for E. coli, as well as requiring precision incubators, trained personnel, and autoclaves for preparing media, sterilizing glass pipettes and collecting bottles, and disinfecting used samples (Doyle and Erickson, 2006; Edberg et al, 2000; Leclerc et.al, 2001, Standridge, 2008, Allen, 2010).

In the 1980s and 1990s, a new generation of easy to perform tests specific for E. coli in water and foods became available as an alternative to the thermotolerant coliform tests. The new tests contained substrates for the p-glucuronidase enzyme produced by E. coli, but not by other coliform bacteria, and the enzyme test didn’t require 44°C incubation (Curiale et al., 1991; Edberg et al., 1988; Feng and Hartman, 1982; Gangar et.al., 1999). Included in the ?-glucuronidase tests were those that contained sterile, dried nutrients that were ready to inoculate, making them independent of an equipped laboratory, the first being the Colilert® test (IDEXX, Westbrook, ME), a defined substrate medium released in 1988 as a 10 ml presence/absence (P/A) test in a glass tube. After inoculation and incubation, a clear tube indicates no coliform bacteria in the sample, a yellow color indicates the presence of coliform bacteria, and a blue fluorescence when a long-wavelength ultraviolet light shines on it indicates the presence of E. coli in the sample. Colilert, in its various forms is the number one water testing method worldwide, with product approval in 40 countries.

An examination of Table 1 leads to the conclusion that the most useful water tests for developing countries would be a 10 ml test, to determine if the water source is low risk or not, and a 1 ml test, to identify high and very high disease risk sources that are responsible for most of the disease burden from contaminated drinking water in developing countries. Furthermore, the tests should be:

The 10 ml Colilert P/A test meets these criteria for the 1 O ml test. It is the only commercially available 10 ml test for E. coli. For the 1 ml test, the E. coli/Coliform Count Petrifilm ™ (Petrifilm, 3M, St. Paul, MN), the most widely used test for E. coli used in the food industry, meets these criteria. The Petrifilm is a flat, 7.5 x 10 cm rectangle composed of a bottom layer coated with sterile dried nutrients to support bacterial growth, a white foam layer with a 5 cm circular opening over the dried nutrients, and a clear top film that encloses the sample within the Petrifilm. To inoculate the Petrifilm, the top layer is lifted to expose the circle of nutrients. One milliliter of the water sample is added to the circle. The top film is slowly rolled down to cover the water. The water is distributed over the circle of nutrients either by tilting the Petrifilm or by using a plastic spreader. In a minute, a gel forms that attaches the nutrients to the top film.

The B-glucuronidase substrate in the Petrifilm is a colorless compound abbreviated BCIG. If an E. coli cell is present in the one milliliter of water that was added to the Petrifilm, in 12-18 hours it will grow into millions of cells that can be seen as a small (1 mm)area of growth called a colony. E. coli will form a blue colony because its B­ glucuronidase will split the G (sugar) from BCI, which is a blue compound. As growth continues, the blue colony will enlarge and be surrounded by small gas bubbles as E. coli metabolizes lactose in the medium to produce gas bubbles (H2 and CO2). Environmental coliform bacteria that turned the Colilert tube yellow but did not cause fluorescence will grow into red colonies with gas bubbles on the Petrifilm. Red colonies, with or without gas bubbles, have no public health significance.

E.coli grows most rapidly at body temperature 37°C. In the absence of a suitable incubator, if ambient temperatures are <30°C that delay the appearance of positive tests, Colilert tubes can be placed in a small sack or sock, and Petrifilms can be placed between thin pieces of cardboard to incubate both tests close to the body for results in 12-24 h. Body incubation also avoids the need for an incubating device and the energy source to maintain its temperature.

Twenty five each of the Colilert and Petrifilm tests are combined to make a Portable Microbiology Laboratory (PML), which also contains 25 sterile plastic pipettes, 25 sterile Whirl-Paks to collect water samples, and a battery-operated, long-wave UV light for the Colilert test. All this fits inside a gallon-size zip lock plastic bag to take to the field.

The PML was developed by Professor Robert Metcalf, California State University, Sacramento (www.imageevent.com/bobmetcalf/watertestingpasteurizationinafrica). It has been field tested by UN-Habitat in Africa (Kenya, Tanzania, Uganda, Ethiopia, and Rwanda) and by Habitat for Humanity in Costa Rica, Nicaragua, El Salvador, Guatemala & Honduras. A comprehensive teaching component has been developed to accompany the PML that includes the UN-Habitat booklet: “A practical method for rapid assessment of the bacterial quality of water,” http://mirror.unhabitat.org/pmss/listItemDetails.aspx?publicationID=3056 . The teaching component demystifies microbiology at the community level, and leads to an understanding of the relationship between contaminated water & disease. In the Friends of the Old project in Lower Nyakach, Kenya, the ability of communities to understand this relationship has already translated into changes in behavior, including an understanding that their contaminated drinking water sources must be treated every time, using either 1.2% sodium hypochlorite or pasteurization with a simple solar cooker heating water to 65°C. Given that close to 1 billion people face this same challenge globally, the introduction of a readily available water quality testing & monitoring method that is simple and easy to use, can significantly contribute to a decrease in the incidence water related illnesses by making knowledge & information more accessible.

The PML consists of 25 Colilert and Petrifilm tests that fit inside a gallon-size zip lock plastic bag, along with Whirl-Paks to collect water samples, sterile plastic pipettes, and a battery-operated long-wave UV light for the Colilert test. Just add water to the tests, let the bacteria grow, and read the results.

The Colilert and Petrifilm tests are specific for E. coli because they contain a substrate for the beta­glucuronidase enzyme that is produced by E.coli, but not by environmental coliform bacteria. Test results are evident in 12-18 hours. Results provide a disease risk assessment of water sources that correlate with the World Health Organization’s Guidelines for Drinking Water Quality:

The PML is introduced to communities with a workshop that includes a teaching component that demystifies microbiology. Subsequent community testing of water sources before and after pasteurization or chlorination provides evidence-based microbiology about water sources and effective household treatment methods.

Use of the PML tests at the community level in low income countries can empower communities with the knowledge and skills to evaluate their drinking water sources and to evaluate available household treatment methods. The tests also provide feedback to health agencies.

Albums of water testing and solar pasteurization in Africa are at: http://www.imageevent.com/bobmetcalf International Water and Health Alliances website: www.waterinternational.org Kenya project on Facebook = Friends of the Old – FOTO